MIBGAS, the organized Iberian gas market operator, negotiated 32% of national gas demand in April 2022, specifically in the spot and prompt products that include the products with gas delivery within the trading day until delivery in the following month. This figure of 8.3 TWh traded is a new record for MIBGAS since it started operating in December 2015.

Given the international climate of uncertainty in the gas market, short-term trading is becoming far more significant than forward product trading on the organized gas market. In the first four months of this year, the percentage of trading over the national gas demand was 21.8% compared to the 15.8% registered in the same period last year, an increase of six points. Likewise, since the 18.3% registered in January, the percentage of national demand has been increasing considerably between the months of March and April from 20.1% to 32% (see graph 1).

Graph 1. Volume traded in MIBGAS-PVB (GWh) and percentage of volume over national demand in the PVB (1 January-30 April 2022). Source: MIBGAS. 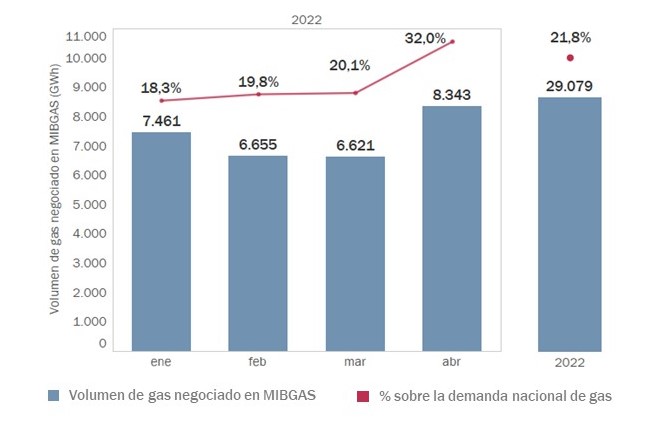 In short, the total volume traded in the spot and prompt segments also increased in these first four months over the figure recorded in the same period last year. From 19.7 TWh in 2021 (January-April), it rose to 29 TWh in 2022, a 47% increase